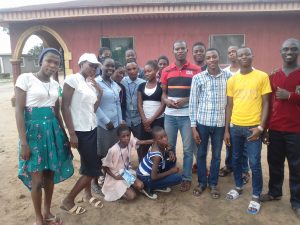 MY ENCOUNTER, WITH SFH, NIGERIA.

I am Osiogwe Ilegogie and fondly called ‘Solutions”. My community, Ologbo was one of the regions in Ikpoba-Okha Local Government Area of Edo State, Nigeria where implementation was carried out and I am a living witness of its impact many years after. CIPHAC aimed at creating, strengthening and supporting the adoption of healthy reproductive and HIV prevention behaviours among the poor and Most At-Risk Populations (MARPs) in selected states and thereby contributed to reinforcing the national response to HIV & AIDS prevention in Nigeria.

One day, a conversation struck with Sunday Ehizogie, my childhood friend about the CIPHAC’s intervention through SFH Nigeria in the state, where after, he persuaded me to become a peer educator. This decision marked a turning point for me that took me off the streets where I was in a situation of reproach and engaged in a number of vices.

Becoming a Peer educator, involved promoting healthy sexual behaviours in Ologbo community especially amongst peers who had similar background or had been exposed to ordeals such as mine. This position, under SFH enhanced my interpersonal skills as well as documentation skills. Interestingly, I still possess most of my materials till date. This opportunity enabled me to partake in invaluable trainings from reputable organizations such as State Agencies for the Control of AIDS (SACA), Institute of Human Virology, Nigeria (IHVN), Edo State Ministry of Health and other CSOs.

After the CIPHAC project, I started working as a volunteer for a number of NGOs within and outside Edo State. I was later trained on HIV Counselling and Testing B 2010 & 2011, and emerged one of the best volunteer under the Care and Support for Orphans and Vulnerable Children (OVCs) implemented by Imade Foundation and sponsored by Institute of Human Virology Nigeria (IHVN). Thereafter, I became a Community Based Organization President for the Ologbo Community Based Organization later changed to Restoration Foundation which is registered under the Edo State Ministry of Women affairs and Social Development.

Determined to further improve myself, I enrolled at the National Open University of Nigeria. (NOUN) to study Peace Studies and Conflict Resolutions. However, I could not complete my education due to financial constraint. Returning to Ologbo community, I refused to indulge in any of the vices which I was rescued from because my encounter with SFH had become a revelation.

Today, I own one of the best computer services and training centres, Cyber Solution Ventures in Ologbo Community. Most of which its teaching techniques today are those adopted from my learnings from SFH and CIPHAC project. While, these might seem like a recount of accolades, I would like to akin this to a door that opened more doors. My autobiography / biography would be incomplete without the change created in me and the major enhancement of my life by Society for Family Health, Nigeria. My sincere gratitude to the founding fathers for a having a vision and the SFH team nationwide for making it a reality that has affected millions of lives like mine.