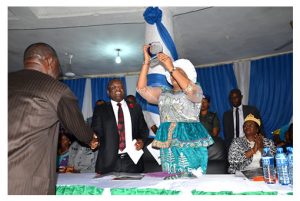 Society for Family Health (SFH) Nigeria has honoured Chief Mrs. Rachel Umahi, wife of Ebonyi State governor, as the SFH Child Survival Ambassador for Ebonyi State. This is in recognition of her personal commitment towards improving maternal and child health in the state. The honour was conferred on her on July 5, 2016  in Abakailiki, at the formal launch of the state campaign against Female Genital Mutilation/Cutting (FGM/C).

As SFH Child Survival Ambassador, Chief Mrs Umahi is expected to utilize her office as wife of Ebonyi State Governor to:

• Champion advocacy in support of innovative interventions that promote children’s health, such as prevention and effective management-of malaria, diarrhoea and pneumonia, access to clean water, the practice of exclusive breast feeding, eradication of harmful cultural practices like female genital mutilation and child marriage.

• Lead mobilisation of community support and acceptance of innovative interventions on children’s health.

FGM/C is a cruel act during which the external genitalia of the girl child/woman is partially or completely cut. This act predisposes mutilated infants, girls and women to irreversible lifelong health risks and sometimes death. FGM/C is a health hazard and dehumanizing against women, it violates human rights, has no health benefits and must be stopped.

It is in view of this that Chief Mrs. Umahi, through the initiatives of her pet project, Family Succour and Upliftment Foundation (FSUP), in collaboration with UNFPA and UNICEF launched the campaign against FGM/C in Ebonyi State. Ebonyi state has an alarming FGM prevalence of 74% and is 2nd highest in Nigeria, after Osun state.

Mrs. Umahi described female genital mutilation as a harmful traditional practice against womanhood, which must be brought to an end. She stated, “We can not continue to live in dark ages at the detriment of our women, in the name of female circumcision or genital mutilation. Our women have suffered a lot in this traditional harmful practice against them and we must stop it, we must wage serious war against the practice. A situation where women reproductive organs are butchered in the name of cultural practices is no longer unacceptable,’’ she vowed.

The Ebonyi State Governor, Chief David Umahi, in support of the campaign promised to work with the state House of Assembly to pass the law that provides severe sanctions against mutilators. In similar vein, community women from different LGA’s in the state who have perpetrated this act publicly committed to abandon the practice of FGM.